In a release signed Thursday 6th February 2020 by Ndenge Godden Zama, SDF divisional secretary general for Fako and Hon. Fritz Ngeka Etoke legislation election List leader for Fako East, they say the CPDM councilor is into electoral malpractices by “collecting electoral cards of some potential voters in exchange for money”.

SDF Fako East holds that if found guilty, the court should cancel the CPDM list in Limbe III.On the other hand, SDF Fako East has noticed what they call the “systematic intimidation of her militants in Limbe”. 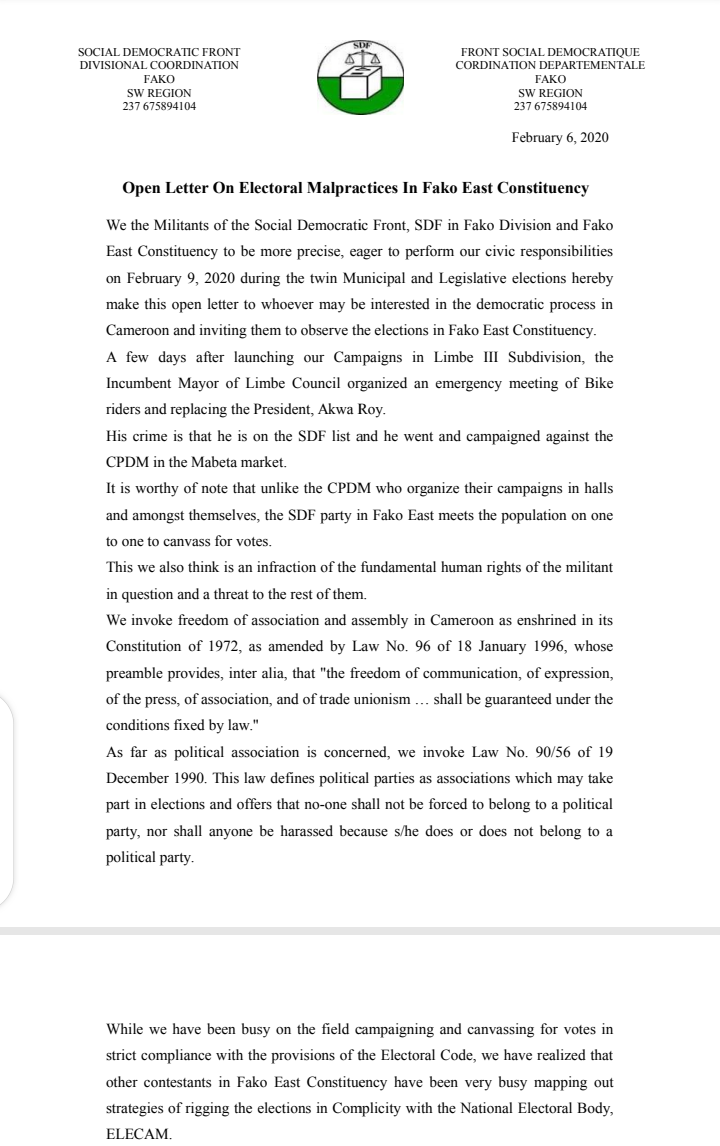 SDF quotes that the president of commercial motorcycle riders Akwa Roy was dismissed from his post by the CPDM incumbent mayor of Limbe III on grounds that the rider campaigned for the SDF party in Mabeta quarter.

To the SDF, that is against freedom of expression and association recognized in the 1972 constitution. The SDF adds that militants of the CPDM party are planning to kidnap five councilors of the SDF party at Limbe III council.

The move they argue is to frighten the militants not to vote on February 9th 2020.Without stating any name, the SDF is pointing accusing fingers on “a newspaper publisher in Bota” for allegedly merchandising voter’s cards.

As concerns elections Cameroon, the body is believed to be assisting the CPDM party in Fako in general and Fako East in particular to rig election.

The SDF has called on the African Union, European Union and the international community to pay particular attention on the voting process in Fako East.

Buea Denizens Brave Day One Of Lockdown, Turn Up For PM’s Visit

Cameroon Embassy In China Reacts To Coronavirus Outbreak At Last

Resolving the Anglophone Crisis: ‘Time is not on the government’s side,’ Dr Christopher Fomunyoh