1 There is as yet, no vital information on the whereabouts of the youth chaplain of Kumbo Diocese Rev. Father Franklin Banadzem Dindzee and Rev. Father Atang . They were kidnapped on Thursday August 15, 2019, along the road leading to Oku, Bui Division in the North West Region of Cameroon. Parishioners and family members have been offering prayers for their safe return.

2 There is celebration in Ntumbaw after the release of the Fon, HRH Fon NFOR MUHAMMED who was kidnapped a week ago has been released, Mimi Mefo Info has learnt. “There is happiness now in Ntumbaw after the release of our Fon, we were all sad as the throne was vacant for one week already,” a Ntumbaw resident told Mimi Mefo Info. The abductors of Fon Nfor Muhammed only released him after ransom was paid. The Fon was kidnapped on August 9, 2019, by Ambazonian fighters. Shanke Augustine who was also kidnapped, had been released.

3 Materials for the reconstruction of a burnt section of an electricity station at Melen have arrived Yaoundé from China. The materials are already being put into use by engineers working to re-establish electricity in some quarters in Yaoundé. A fire incident on the 7th of August 2019 left several quarters without electricity.

4 The Equatorial Guinean minister of external relations has stated that there is a lot of misinformation regarding the construction of a wall along the country’s borders with Cameroon. The minister was granted audience by the Cameroon Prime Minister Dr. Joseph Dion Ngute. The Equatorial Guinean special envoy handed to the Prime Minister, a sealed message for President Paul Biya. He failed to mention the motivation behind the construction of the wall at a time when there are talks of free movement of persons within the Central African sub region.

5 The issue of school resumption has been called in to question in Jakiri, Bui Division in the North West Region of Cameroon. Today, the population virtually boycotted the visit of the Senior Divisional officer of Bui Division. Simon Emile Mooh called on the few parents to ensure that kids return to school in September.

6 Traditional rulers will tomorrow Saturday 17th August 2019, organise a rally for peace in Bamenjou in the West Region of Cameroon. The purpose is said to be aimed at calling the gods to maintain peace in the English-Speaking Regions of the country. The delegation of traditional rulers drawn from the ten regions of Cameroon paid a visit to the governor of the West Region today, ahead of their meeting tomorrow.

7 Professor Jacques Fame Ndongo has called on graduates of ENS to be ready to serve Cameroonians in any part of the country following their postings. He made the call as one thousand and eighty students of the Higher Teachers’ Training Institution (ENS) Yaoundé received their end of course diplomas today.

8 The search for about twenty foreigners kidnapped at the estuary to the Douala seaport continues. Elements of the marine and those of the rapid intervention battalion (BIR) are searching for the Kidnappers as well as the missing persons. Kidnappers are reported to have taken the foreigners some 50 kilometres off the coast of Douala. Seaport officials are yet, unable to determine the nationalities of those kidnapped. Accusing fingers are pointing at pirates from the Federal Republic of Nigeria. Kidnappings are frequent around the Gulf of Guinea.

9 The ailing leader of a banned Shia Muslim group in Nigeria who travelled to India to recevie medical attention, has returned home without treatment. Sheikh Ibraheem Zakzaky, 66, said the Indian government gave him an ultimatum to accept offered treatment or return to Nigeria

10 Zimbabwe’s main opposition group has called off anti-government protests in the capital Harare at the last minute, after failing to overturn a police ban. As a result, protesters who had already gathered in the city were violently dispersed by police. Several protesters are reported to have been injured in the process.

11 Uganda has denied allegations that it hacked into the encrypted communications of musician-turned-MP Bobi Wine. The Wall Street Journal alleges that Ugandan officials worked with technicians from telecoms company Huawei to infiltrate the politician’s WhatsApp chat group, named ‘Firebase Crew’ after his band.

12 Liberian Senator decides to cut his own salary. Outspoken Liberian opposition politician Abraham Darius Dillion, who has become the newest member of the senate after defeating the candidate of President George Weah in a crucial by-election last month, has announced that he has taken a self-imposed pay cut.

May your weekend be blessed 🙏🙏🙏 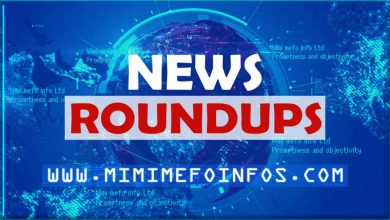