Government shuts Cameroon’s national boundaries, Schools and has prohibited the gathering of more than 50 people. Bars and drinking spots are to shutdown from 6pm each day. These measures and more will go into effect from tomorrow March 18th. These measures were taken in a crisis meeting chaired by PM Dion Ngute.

President Paul Biya has called on Cameroonians to respect coronavirus preventive measures put in place by the government . He mentioned this in a tweet. He adds that coronavirus is a global threat today.

Major events earlier scheduled to take place in Cameroon have been suspended. This include national FENASCO B games, University games, Limbe Arts and Craft Festival (FESTAC) and Annual Show. The principal reason is the detection of Coronavirus cases in Cameroon.

The ban of commercial motorcycles from plying the road from 6pm to 5:30 am in six out of the 7 divisions in the North West region has worsened the social situation in the region. Being a major means of transport, inhabitants say they are forced to trek to their destinations sometimes.

Cameroon’s Prime Minister Dion Ngute has announced a series of measures to combat the coronavirus spread. The measures set to take effect from tomorrow March 18 are as follows:
-Land, air and sea borders closed.
-All Schools closed.
-Passenger flights suspended.
-Suspension of visa issuance into Cameroon.
-Prohibition of gatherings of more than 50 persons.
-School Competitions postponed
-Bars, Restaurants, entertainment
spots closed from 6pm.
-Regulation of consumer goods in markets.
-Urban and inter-urban travel is only necessary in serious cases.
-Avoid overload In public transport.
-Hotels and accommodation facilities, equipment necessary
for the response can be requisitioned
-Public Administration preference to
electronic tools for meetings of more than 10 people.
-Missions abroad are suspended.
-Ensure respect of recommendations by WHO.
-CALL 1510 FOR EMERGENCIES

Comfort Mussa, one of Cameroon’s finest journalists has been appointed Social inclusion representative on the board of Innovation for change Africa. “Commy” as many know her has championed for equal opportunities for persons living with disabilities in Cameroon. She is a passionate gender promoter and writer of human interest stories.

A tricycle carrying cans of fuel caught fire today morning at the Para junction in Maroua in the Far North region. The flames completely devoured the containers before the arrival of the firefighters.

Yaounde 1 University earlier today announced the partial suspension of lectures to prevent COVID-19 spread. Going by the decision, lectures will be taking place in other smaller lecture halls that do not require a greater number of students. This was however, earlier before the government imposed a complete shutdown on Schools.

Hon Caveye Yeguié Djibril reelected as House Speaker. He got an overwhelming victory after being chosen by the CPDM Parliamentary Group, lead by Hon Ndongo. In the same vein Hon Hilarion Etong of the CPDM got reelected as vice speaker, with a total of 147 and 166.

As part of measures to curb the spread of Coronavirus in Cameroon, all passengers on board Air France that landed at the Douala International Airport Tuesday evening march 17th 2020 have been quarantined. They have been taken to some hotels, including Jet Hotel, Saffana and Adamaoua Hotel around the Douala airport. They will be quarantined for at least a 14-day period. Cameroon now counts 10 confirmed COVID-19 cases.

A building hosting a mobile money sales point has been reduced to ashes in the Makepe neighbourhood of Douala. The fire erupted from a yet to be identified source, but locals say a huge financial loss has been registered.

The chairman and the Executive president of the Cameroon Baptist Convention, CBC have convened an extraordinary council meeting for Friday March 27 due to the COVID-19 spread. Government earlier today closed borders, instituting other measures to contain the spread.

For the first time a Cameroonian is said to have passed away due to the COVID-19 virus. Jean Didier Mbeng, Culturebene reports, passed away in hospital in Paris, France.

CNA has reported that death toll of the latest attacks in villages in Ngohketujia Division has risen to seven. At least 7 persons have died (one Ambazonia fighter and six civilians in Bambalang and Bangolan, all in Babessi and Ndop subdivisions, Ngoketundjia division in the northwest region. One week after the attack at a Gendarmerie and Police Posts in Galim, West region, Soldiers have launched a series of attacks in Babessi and Ndop, forcing dozens to flee from villages into bushes. Since Friday, March 13, Soldiers carried out offensive through the land and the lake. In Bambalang, one of the villages of the Ndop central subdivision, they came through the water (Mbissa) from Kutaba through the Bamendjin dam that separates the West from the village.

The Confederation of African Football (Caf) has announced the postponement the African Nations Championship tournament, which was set to kick off next month, because of the coronavirus pandemic. The West African Nation Cameroon has reported five cases of the virus.

Liverpool player, Sadio Mane has made a donation of 30 millions FCFA – around 45,000 euros (£41,000) – to the national committee fighting against coronavirus in his home country of Senegal. Sadio Mane’s agent said decided to make the donation “spontaneously when he saw the evolution of the situation” with the increase of Covid-19 cases in Senegal. Mane also shared a video on social media where he asked his compatriots to take coronavirus “extremely seriously”.

Doctors in Nigeria’s capital, Abuja, have gone on an “indefinite strike” over delayed pay and unsafe working conditions.The announcement came just after Nigeria, Africa’s most populous nation, confirmed a third case of Covid-19. Nigeria’s third confirmed case of coronavirus is a 30-year-old Nigerian woman who flew into the commercial city of Lagos from the UK on 13 March.

Tanzania has announced the closure of all schools as part of measures to curb the spread of coronavirus in the East African nation. They will be shut from Wednesday for 30 days, Prime Minister Kassim Majaliwa said.

Rwanda has confirmed two new cases of coronavirus, bringing the total number to seven. The country’s Ministry of Health says of the two, one is a Rwandan woman whose husband had earlier tested positive. (Source Foreign News: BBC Africa)

Kenya’s President Uhuru Kenyatta has urged citizens to set aside time on Saturday to pray to end the coronavirus pandemic. The East African nation announced on Tuesday that it had confirmed its fourth case of Covid-19, the respiratory illness caused by the virus. Health Minster Mutahi Kagwe told reporters that more than 100 people had been tested since the first patient was diagnosed on Friday.

The president of Malawi has refused to ratify changes to the electoral laws which had been approved by parliament and were meant to pave the way for fresh elections in May. He has filed an appeal against that decision. 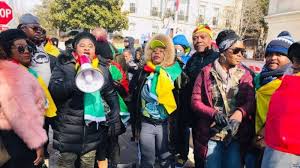