Recently, security forces issued a statement, announcing they had killed some separatist fighters and captured others in Belo, Boyo Division in the North West region Cameroon.

But reliable sources in the area have told Mimi Mefo Info, that some of those arrested had nothing to do with the conflict that has ensued for close to four years in the Anglophone regions of the country.

According to a source who did not wish to be identified: “They were taken at Fuli, one kilometer away from Belo Town … and they were not even in the direction where amba boys have pitched their camp. When the military surrounded Belo and was going up to Anyahjua to hunt amba boys, some of the soldiers were heading towards Fundong when they picked the suspects”. 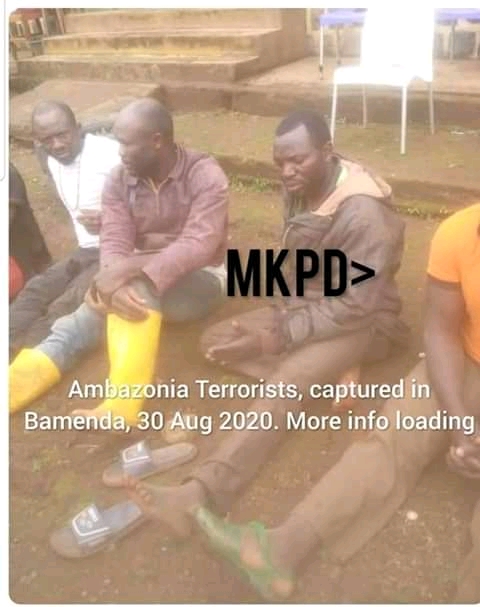 Government forces also displayed images of the “suspected separatist fighters” arrested during the operation, a move that has further deepened the existing mistrust that the local population has vis a vis the security forces.

Family and friends of some of those apprehended say they are builders and farmers, “not separatist fighters”. One of them explained to MMI in tears saying:

“I can’t go to sleep anymore. My uncle has been picked up in Boyo, precisely in Belo Subdivision, in the troubled zone. His name Is Kibang Honest Toh, a farmer from the South West Waterfall, he has never been a fighter, we are all very surprised to see this. This is a man who worked hard to take care of his home and the family”.

He continued by adding that: “On Sunday, they were picked up by the military in Belo and were later presented in Fundong as Ambazonian terrorists”.

All efforts to know his uncle’s whereabouts, he told us, have proven futile.

A friend to some of the arrested has a similar story to share. “I saw pictures of Eric Njuakom and Chiano Emmanuel, well-known builders in Belo being tagged as terrorists … I know them very well, that is not true, we can’t tell what is going on,” he explains.

Emmanuel, one of those arrested, he says had been a builder since 2014 and even had trainees who depended on him for their professional growth. He would later return to school to further his education.

“The Other person is Njuakom Eric, the simplest boy in Belo. He was working with Emanuel and was doing bike riding when things were still functioning in Belo,” he adds.

This is not the first time such arrests are being coordinated in the North West and South West regions, where the English-speaking population declared a breakaway state called Ambazonia, following decades of marginalization and neglect.

Accused of collaborating with or being separatist fighters, hundreds of Anglophones have either been locked up in different detention centers across the national territory or summarily executed. Domestic and International Human Rights organizations have called out the Yaounde regime on these atrocities, but there seems to be no end in sight to the violence.