The past weeks have been particularly tough for humanitarian workers in Cameroon’s Anglophone regions. According to Human Rights Watch, armed separatists kidnapped a humanitarian worker, in Cameroon’s English-speaking North-West region on Saturday. “They accused him of being a spy, tied him up to a tree, and savagely beat him before releasing him on Sunday,” HRW said in a report on Thursday.

According to the rights group, “the latest attacks occurred just 5 days before the United Nations Humanitarian Coordinator in Cameroon, Allegra Baiocchi, expressed grave concern over the interruption of aid delivery to hundreds of thousands of people in need, following the escalating trend of attacks against humanitarians.”

Separatist fighters however don’t bear all the blame for the violence, says Human Rights Watch. In a statement, on the plight of humanitarian workers in the North West regions, it says “government forces also bear responsibility. Aid workers have been victims of unlawful killings, abductions, harassment, extortion, and other abuses as supplies and property have been looted and destroyed.”

HRW adds that “humanitarian access has been severely hindered by the violence, as well as by deliberate actions carried out by the separatists and government forces and authorities.”

The United Nations has not been indifferent to the recent happenings. United Nations Humanitarian Coordinator in Cameroon, Allegra Baiocchi has reiterated her worry over the increased harassment, attacks, abductions and extortion of humanitarian workers.

“The situation has reached a point where aid delivery has had to be scaled back, putting many lives at unnecessary risk.
I am particularly troubled by the increasingly widespread practice by non-state armed groups of setting up illegal checkpoints along main supply routes and abducting aid workers” says Allegra.

She adds that “the aggressive reinforcing of “ghost town” days, the use of improvised explosive devices (IEDs) in heavily frequented areas or the closure of inter-city transport for several days, have further constrained the ability of humanitarian organizations to operate, with dire consequences for the population they seek to support”. 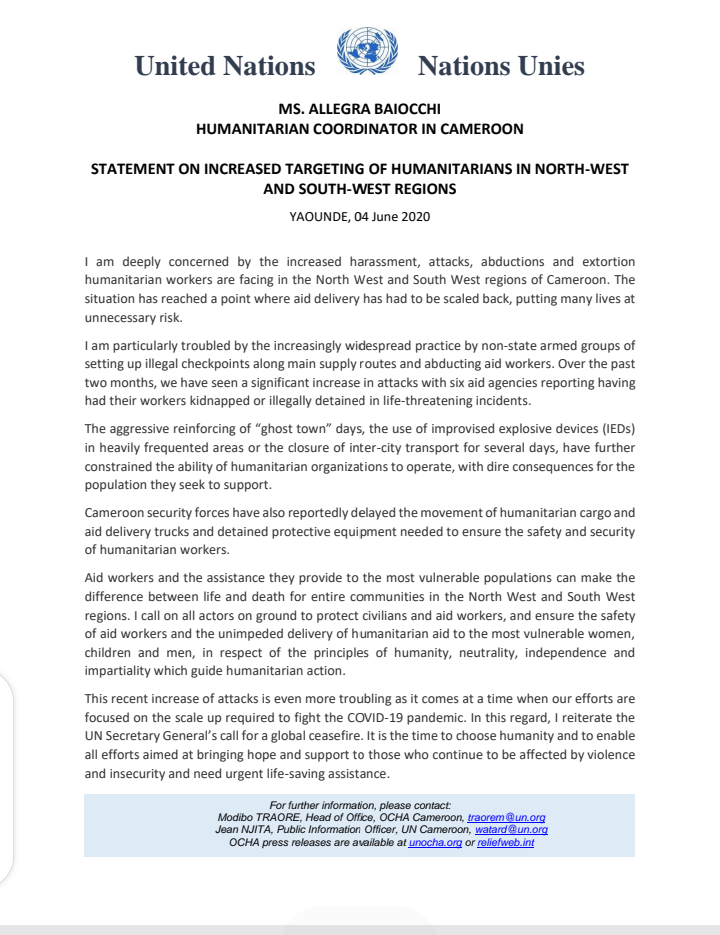 Like the Human Rights Watch, the United Nations is also of the opinion that the role of government forces in creating such a situation cannot be undermined.

“Cameroon security forces have also reportedly delayed the movement of humanitarian cargo and aid delivery trucks and detained protective equipment needed to ensure the safety and security of humanitarian workers” she says.

Making an appeal to the warring stakeholders, Allegra says: “I call on all actors on ground to protect civilians and aid workers, and ensure the safety of aid workers and the unimpeded delivery of humanitarian aid to the most vulnerable women, children and men, in respect of the principles of humanity, neutrality, independence and impartiality which guide humanitarian action.”

With Cameroon facing the COVID-19 pandemic like many other nations worldwide, the UN representative in the country says “it is the time to choose humanity and to enable all efforts aimed at bringing hope and support to those who continue to be affected by violence and insecurity and need urgent life-saving assistance.”

The calls come at a time when a lockdown instituted by separatist fighters in Ndop has left hospitals in Kumbo short of supplies. Despite calls by the UN Secretary General for a ceasefire due to the fight against COVID-19, the warring parties have not stopped reigning terror in the regions.

West Region: Man hangs to death after falling out with wife

Bamenda: One dead as population renders jungle justice on gang of thieves

At meeting in Buea: Lebialem Indigenes Vow To Revamp Socioeconomic Growth of Division