The UN High Commissioner for Human Rights, Michelle Bachelet has described government action on the Ngarbuh massacre as a positive step. She highlighted the fact that the commission created under the authority of Cameroon’s Ministry of Defence worked with the participation of civil society representatives, religious leaders and the President of the national human rights commission.

With the perpetrators known, Bachelet says “it is now essential that all those responsible for the deaths of the people in the village of Ngarbuh-Ntunbaw are held fully to account in a fair and transparent judicial process.”

The diplomat recalled that hundreds of thousands of people have been displaced in recent years by clashes between security and defence forces and armed separatist groups in the North-West and South-West regions.

“I call on the Government to ensure that the security forces abide by applicable international law norms and standards during the conduct of their operations,” She adds. 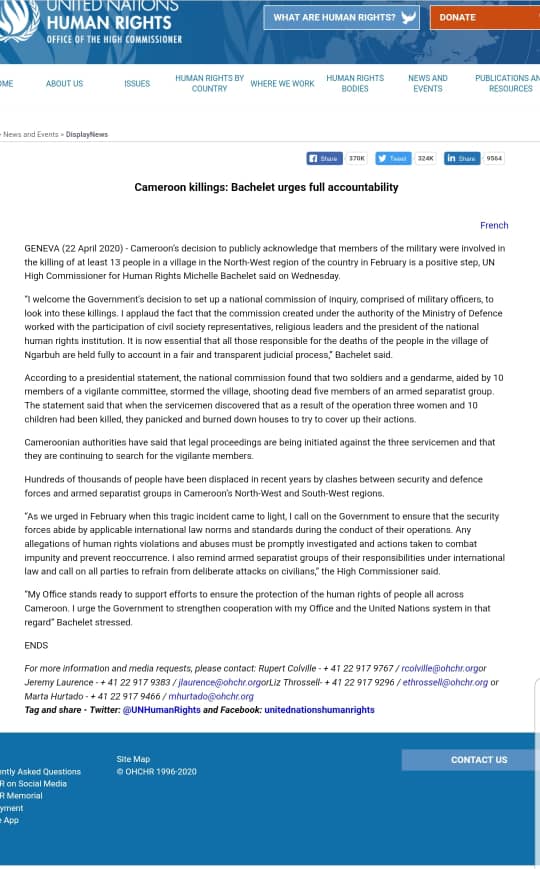 Videos and images have shown separatist fighters in different instances carry out rights violations including kidnappings, torture and arson. Government soldiers have also made the English-speaking communities unlivable to the people for over three years now. The UN High Commissioner wants an end to ongoing abuses.

“Any allegations of human rights violations and abuses must be promptly investigated and actions taken to combat impunity and prevent reoccurrence” Bachelet insists, reminding “armed separatist groups of their responsibilities under international law and call on all parties to refrain from deliberate attacks on civilians.”

Pledging the support of the UN human rights commission, Bachelet urged the Cameroon government to strengthen their cooperation in a bid to ensure the protection of citizens.

Bachelet it should be recalled visited Cameroon in May last year during which she welcomed Cameroon’s willingness to cooperate to tackle human rights crises. Among other issues she “urged them (government) to halt the practice of charging civilians before military courts. I believe there is an urgent need for a change of approach towards dissenting politicians and critical members of civil society, and a need for significant gestures to rebuild trust and confidence.”

She also called for a frank and inclusive dialogue – which is yet to happen since the start of the conflict.