Newspaper stands all over Cameroon are expected to be almost empty following a decision by publishers to halt production.

Making the decision ahead of today’s World press freedom day, they say it is as a result of neglect f their sector.
In a communique yesterday, Cameroon newspaper publishers (REPAC) called for a “dead press” as part of commemoration of the day.

Among the ten concerns raised is the refusal of the state to support the resilience of the media in reporting the ongoing covid-19 pandemic. In addition to the economic fragility of press organs heightened by restrictive measure spur in place to combat the health pandemic, REPAC says there is an”accumulation of the payment of arrears for services rendered by the press at the public treasury. ”

The body also frowned on government’s “unsuitable tax policy for the press, [And] … the arbitrary arrests of journalists in the exercise of their functions and the maintenance of the deprivation of liberty for press offences in contradiction to the standards and international commitments of Cameroon.” 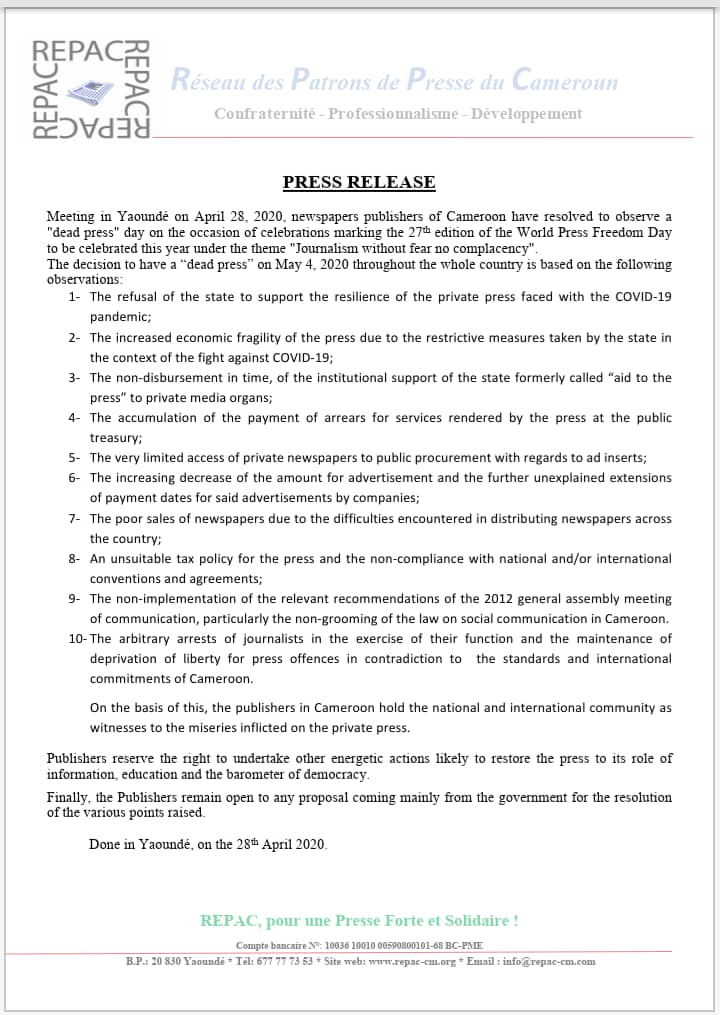 Promising to remain open to government proposals to solve all issues raised, REPAC says it however reserved the right to take further action that will see it restore the press to its normal functions in society.

The Cameroon government has come under a lot of criticism over its handling of the media and journalists over the past years. It has however remained silent, even to calls for the release of jailed journalists whose health may be affected due to the poor living conditions they face.

Nkongsamba: Man tortures wife to near death for speaking dialect with child