Hours after MRC’s Prof. Maurice Kamto’s viral debate, government calls on his party and others to take part in February twin election as a sign of patriotism.Few hours after Prof Maurice Kamto took part in a televised interview watched by hundreds of thousands of Cameroonians, Communication Minister Rene Sadi and Territorial Administration Minister Atanga Nji Paul in a press conference today said the elections cannot be postponed.Prof. Kamto on Equinoxe TV’s “La Verité en Face” reiterated that a smooth election in Cameroon is impossible, citing bad electoral laws and the armed conflict in the English Speaking regions.Rene Emmanuel Sadi said government is calling on “leaders of political parties to demonstrate good faith, civic responsibility and national civic and Republican conscience”.The decision by some parties not to run for the elections in the basis of administrative bottlenecks in the document compilation process he said, is ungrounded explaining that all parties were “under the same constraints”.”The government also reassures national and international opinion that all security conditions and measures to ensure the reliability of the electoral process will be taken,” he added. 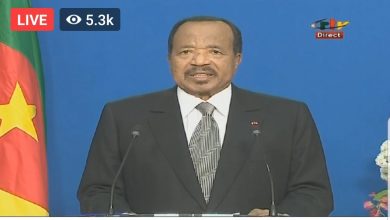