Munjah Vitalis Fagha bagged home a PhD in Political Science from the University of Buea Saturday, May 16, 2020 after a thesis defense in which he made recommendations that could see an end to the socio-political situation in the North West and South West Regions.

The thesis titled “The African Peer Review Mechanism and the Strengthening of Political Institutions in Africa: A Comparative Analysis of Cameroon and Rwanda” reveals that Cameroon’s governance structures need to be subjected to a comprehensive governance review process if the country wants to make remarkable progress in governance and in averting and resolving intra-state conflicts.

Munjah posits that the New Partnership for Africa’s Development (NEPAD) that was crafted as a blueprint for Africa’s renewal, with its most innovative and audacious element being the African Peer Review Mechanism (APRM), launched in 2003 to improve governance, can be a panacea for Cameroon’s deteriorating governance situation and rising intra-state conflicts. 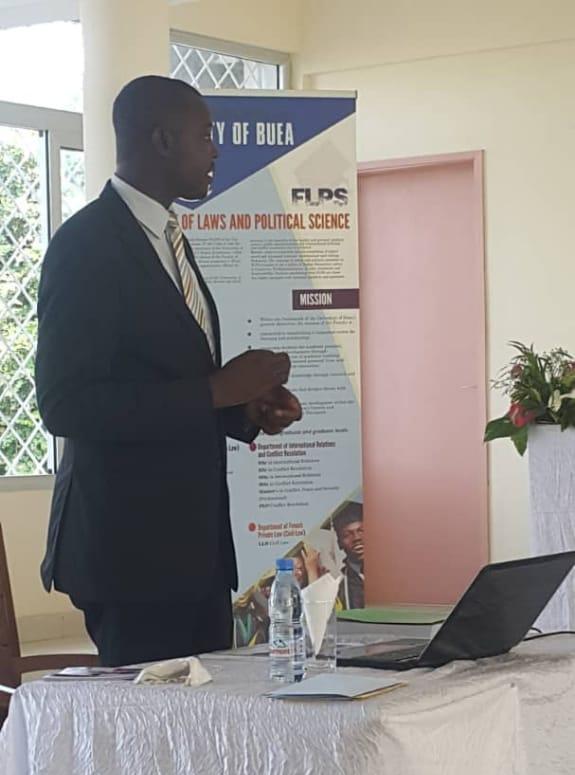 Dr. Munjah told reporters that although Cameroon was among the first countries to accede to the Memorandum of Understanding (MoU) on 3rd April, 2003 to set up the peer review mechanism, it is yet to begin the review process in earnest.
“All discussions about the APRM process in Cameroon end at the Prime Minister’s Office and in the hands of all the three panel members designated by the APRM Secretariat in Midrand, South Africa to foster the implementation of the process in Cameroon,” he said.

He notes that the situation in the country’s North West and South West regions could even have been avoided if the government of Cameroon undertook the Peer Review process and drew up actions plans based on the country review report to address the issues raised. In the absence of that, the governance situation in Cameroon deteriorated making the executive arm of government to remain dominant over the other branches of government thus forestalling the separation of power, rule of law and constitutionalism.

“The APRM Heads of states and Governments Implementation Committee (HSGIC) and the government of Cameroon seem to be unwilling to kick start the peer review process in Cameroon 15 years after acceding to the MoU. Not even the current crisis has necessitated the review,” said Dr. Munjah.

In studying how APRM has strengthened political institutions in Rwanda and comparing it with Cameroon, Munjah focused on Democracy and Good Governance component, considering variables such as: the prevention and reduction of intra-state conflicts; Constitutional democracy; The rule of law and supremacy of the constitution; The separation of powers (including the protection of the independence of the judiciary and of an effective legislature); Accountable, efficient and effective public office holders and civil servants; and Rule of law and fighting corruption in the political sphere.

The APRM, Munjah posits, provides a useful lens through which political scientists can examine governments, and regimes that wish to abide by the principles of good governance propagated by the World Bank through the good governance theory. Munjah subscribes to the views expressed by apologists of the Good governance theory and contends that there are some basic principles in governance that must be respected by all governments, whatever its form.
The scholar in his recommendations enjoined the Head of State to personally commit to the African peer review mechanism so that Cameroon can get some of the benefits that have accrued to states like Rwanda, Ghana and Kenya because their Heads of State demonstrated a high degree of commitment to the ideals of the continental body and directed the review process. If that is done, it will facilitate open dialogue and learning, as well as build mutual trust among political stakeholders in Cameroon.

In such an environment, frankness, robust debate, differences in opinion and criticisms will be less threatening and more acceptable .
“The APRM process should therefore be undertaken as matter of urgency in Cameroon, in view of creating a dialogue forum that might provide solutions to the on-going Anglophone crisis,” said Dr. Munjah.