Human Rights Watch has presented Cameroon’s performance in the domain of the respect of human rights in its fight against the restoration of Southern Cameroon, Boko Haram. The report also focuses on Cameroon’s crack down on opposition political parties, sexual orientation and gender identity and accountability in judicial process in the course of the year 2019.As concerns the war for the restoration of Ambazonia, Human Rights Watch said from January to December 2019, both government forces and armed fighters called Amba boys violated human rights in their activities with the local population that have unfortunately bear the pains of the activities of the forces and fighters.On the activities of government forces that deprived Cameroonians of their rights, Human Right Watch said government forces “conducted large scale security operations in different towns and villages in the North West and South West regions of Cameroon”.On February 6th, security forces stormed Bole Bakundu village in Meme Division in the South West region killing ten men suspected to be separatist fighters.
Two months after the incident, Human Right Watch reports that soldiers carried out a deadly attack in Meluf Bui division in the North West region of Cameroon killing five persons including a man suffering from a mental problem. In the process, houses were burnt and property looted in shops and houses in the village.On the 15th of May 2019, military men attacked Mankon in Bamenda in the North West burning seventy houses and killing at least three persons, an attack government has never presented report of an investigation of what went wrong for defaulters to be punished. 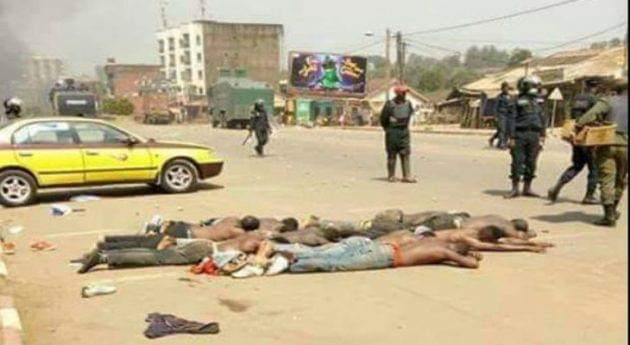 Elements of the Rapid Intervention Batalion (BIR) “attacked UNESCO world heritage site; the Royal Palace of Bafut looting the place’s museum and taking away several palace artifacts.”In the course of the attack,/one person was shot by the military.On the other side of the war for the restoration of Ambazonia, Human Rights Watch says separatist fighters have killed, kidnapped, tortured and vandalized property of individuals suspected to be betrayers as well as government structures.On the 16th of February, Ambazonia boys abducted 170 students, a teacher and two night watchmen in a school in Kumbo in the North West region of Cameroon.The hostages were released the following day. It however remains unclear if ransom was paid to the boys.
In the aspect of killing, Human right Watch says separatists have killed administrative officials, tortured traditional rulers ,students, teachers, businessmen and other Cameroonians and foreigners kidnapped. The boys in the course of the year equally took over some school campuses in the North West and South West regions of Cameroon using them as their camps, thereby disturbing the smooth functioning of school in the regions.Human Rights Watch authenticated a video showing armed separatists in mid May torturing a man in an abandon building in Bali in the North West region.The school has been closed since 2017 due to violence.40 women and children and were kidnapped and tortured in Bafut on the 18th of June by separatist fighters. On June 28th, separatists kidnapped the Chairman of the Social Democratic Front (SDF) Ni John Fru Ndi.In August 2019, ten interim leaders of the self proclaimed state of Ambazonia were sentenced to life in prison in a trial believed not to have followed a due process.The sentence caused more violence in the North West and South West regions of Cameroon.The activities of security forces and separatist fighters have caused the death of three thousand civilians and hundreds of security forces since 2016 when the war for the restoration of Ambazonia statehood started. In the same line, half a million people have been displaced.As concerns the war against Boko Haram insurgency in the Far North region,100 attacks were carried out in Cameroon causing the death of 100 Cameroonians. A total of 270.000 people have been displaced.Crack down on opposition political parties.Starting his seventh mandate as the president of Cameroon in November 2018, Human Rights Watch observes that president Paul Biya’s government has curtailed freedom of association, expression and assembly.
The regime has systematically banned activities of opposition political parties from protesting and expressing their feelings on political issues in Cameroon.Hundreds of militants of the Cameroon Renaissance Movement political party and their allies were arrested detained under deplorable conditions. Some have been release while others are still in detention.On the 5th of April, the minister of territorial administration banned demonstrations planned by the CRM party. Paul Atanga Nji accused the party of trying to destabilize Cameroon.
Besides arresting opposition political party militants, the regime arrested a civil society activist Abdul Karim on the 25th of September 2019. Released on the 1st of November, Karim was detained for five days incommunicado at the state defense secretariat in Yaounde.
Human Rights Watch presents government’s obscure judicial process marked by no accountability. The body quotes the military attack in Mankon where 70 houses were burnt. Government till date has not presented a report of what happened nor offered compensation to victims.To further keep in the dark activities of human rights violations, government on the 12th of April denied access to human rights Watch researcher from getting to the country despite several explanations.