President Paul Biya says calm is gradually returning in the North West and South west regions of Cameroon. He made the declaration Friday as he chaired the graduation ceremony of the 37th batch of students of the combined-military academy, EMIA.

Dr. Steve Ondoa Samba of GBHS Ayos has returned to his duty post after questioning for unruly behavior against the Divisional officer of Ayos. The DO of the area, Mbey Sandrine ordered the teacher’s arrest for disrespecting her. The administer came under fire on social media with many calling for her dismissal.

A 17-year student of Government Bilingual High School Nkoleton died Friday after a physical education exercise on the school campus. The principal of the school said the form five student, Gabriel Leuketock developed suddenly had a malaise after sporting activities with his classmates.

Four persons were reportedly killed Thursday night in Muyuka in the South west region of Cameroon. Residents say armed men launched an attack in the locality. The situation has further raised panic on how the electoral process will unfold there.

Cameroon’s political parties are bracing up for the start of campaigns ahead of the municipal and legislative elections Saturday. Union des Population du Cameroon, UPC will be taking part despite an earlier announcement that it was boycotting the poll.

Elections Cameroon, ELECAM has called on political parties running for the February 9 twin elections to appoint representatives at the local polling commissions. Each party running is entitled to just one representative. There is however still doubts on how successful the process will be as many Anglophone politicians have pulled out of the race.

Kah Walla and the Stand up For Cameroon Movement have intensified their black Friday campaign. Declaring 2020 the year of transition, Kah Walla says they must act individually and collectively to make it happen. Among their strategies she says, is the launch of a new communication campaign to educate the public about Political Transition.

The maiden edition of The Guardian Post Magazine was launched today Friday, January 24th, 2020. It coincided with the inauguration ceremony of the newly constructed head office of Cameroon’s lone Daily English language newspaper The Guardian Post. The Magazine revisits the genesis of the Anglophone crisis and features renowned political features that give proposals to lasting peace in the conflict-hit regions.

The death of a man, his wife and son this morning in Yaounde following a ghastly accident has left Cameroonians in shock. The vehicle driving the couple and their kid was crushed by another from the opposite direction. It occurred at Vallee Nlongkak roundabout. A lawyer told MMI that the deceased family head is said to be the son of Senator Dingha Ignatius from the North West region.

Aggrieved teachers in Cameroon have called for ‘no chalk Day’ to sensitize the education community on school violence. Weeks after the death of their colleague, some are threatening to stop teaching until the government takes concrete actions. They have since made calls for what they call ‘No chalk day’ on January 29. In a related development, the Cameroon Teachers Trade Union has also called on teachers all over the country to observe two days of no work from Thursday 30 to Friday, January 31, 2020.

The UN has called for international help to fight huge swarms of desert locusts sweeping through east Africa. A spokesman for the UN’s Food and Agricultural Organisation (FAO), called for aid to “avert any threats to food security, livelihoods, malnutrition”. Ethiopia, Kenya, and Somalia are all struggling with “unprecedented” and “devastating” swarms of the food-devouring insects, the FAO has said.

South African billionaire Patrice Motsepe has divided opinion online after telling US President Donald Trump that Africans love him. “Africa loves America. Africa loves you… we want America to do well. We want you to do well,” the businessman told Mr. Trump at a World Economic Forum event in Davos, Switzerland. Critics said Mr. Motsepe had given himself the role of Africa’s spokesman.

Nigerian star Yemi Alade recently signed a two-album deal with Universal Music France, after lengthy negotiations. Talking to me on the BBC’s This Is Africa program, she advised other African musicians to hold their nerve and have confidence.

A Tanzanian university student who was arrested on Tuesday for posting a photo of water problems in his institution has been released, according to a local human rights organization. University officials picked up Mugaya Tungu from the police station and said the matter would be resolved internally, Tanzania Human Rights Defenders Coalition wrote in a statement.

Ivory Coast’s President Alassane Ouattara has told the BBC he is “not in a rush” to decide on running for a third term in office in the elections that will be held at the end of October. President Ouattara has in the past indicated that he will run for the presidency should the leaders of the other main parties, who are also political veterans, do the same. 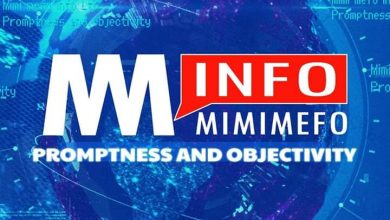